Guide Theseus and the Minotaur

Angered by King Minos' disrespect, Poseidon plotted to punish him for his arrogance and hubris. In accordance to some versions of the myth, it is Poseidon who punishes Minos by instilling a passion within the king's wife, Pasiphae, for the bull that came from the sea. However, according to the Roman author Hyginus, it is Venus Aphrodite who curses Pasiphae, because the Queen had not shown proper piety to the goddess for some time.

The goddess punished her by sending a salacious passion for the majestic bull from the sea. Another version tells how Poseidon, angered by Minos, went to Aphrodite for her help in the matter and she cursed Pasiphae as a favor to Poseidon. Queen Pasiphae, plagued by her divinely inflicted desires, sought the help of Daedalus and Icarus. For Pasiphae, Daedalus constructed a wooden cow coated with a real cow hide and placed it upon wheels.

Daedalus, then, put Queen Pasiphae inside the structure and wheeled her into the meadow that her beloved bull grazed in. It was there that she met and laid with the bull, since the bull thought the wooden cow was real. It is from this union that the Minotaur was born. Upon seeing the infant, King Minos discovered his wife's bestial affair and as punishment, Minos enslaved Daedalus and Icarus for their parts in the affair, but he left Pasiphae untouched.

The myth of Theseus and the Minotaur

Pasiphae cared for Asterion and was able to nourish Asterion while he was a bull calf. However, as he grew he became ferocious and monstrous and she was unable to feed or care for him any longer. Asterion was unable to find a suitable source of food, since he was neither man nor beast, and so he started to eat people. While the construction of the Labyrinth was underway, King Minos discovered that his only human son, Androgeos, with Pasiphae had been killed.

Some sources say that he was killed by the Athenians out of jealousy for his skill in the Panathenic Games. A different version of the myth claims that the King of Athens , Aegeus, was angered by Androgeos' victories, and sent him to slay the unconquerable Marathonian Bull.

He sailed against the Athenians and harassed them until they agreed to pay the price for his son's death. King Minos demanded that Athens pay a tribute to Crete of seven maidens and seven youths every nine years.


There is some contradiction in the sources about how often these tribute were made, from every nine years to once a year. These tributes would then be placed in the Labyrinth for the Minotaur to devour. In various sources, the tributes or sacrificial victims were chosen by lot from only the most beautiful men and virginal girls. The Athenians consulted the Oracle of Delphi who instructed the city of Athens to give Minos whatever he demanded.

However, according to Catullus, the murder of Androgeos sparked a cruel plague on Athens. It is only when King Aegeus learned that by sending tributes to Crete and obeying Minos' demand that Athens would be saved; he agreed. Theseus, son of King Aegeus, was said to have volunteered for the third tribute of youths.

He boasted to his father and to all of Athens that he would slay the Minotaur. He promised that on the journey home he would raise his white sails if he was victorious or have the crew fly black sails if he failed and were killed. Unable to cope with Theseus being eaten by her half-brother the Minotaur, Ariadne went to Daedalus for help.

She begged the craftsman to tell her how one could escape from his Labyrinth. Once he had told her, she raced to tell Theseus before he entered the Labyrinth. Following Daedalus' instructions, she handed Theseus a ball of string to help him find his way out of the Labyrinth. Upon entering the Labyrinth, Theseus tied one end of the string to the door and continued into the maze. He found the Minotaur in the furthest corner of the Labyrinth and killed him with the jabs of his fist or in other accounts, he sneaks in the sword of Aegeus and slays the Minotaur with it.

Unlike the Labyrinth's previous victims, Theseus is able to find his way out, because of Ariadne's gift. Theseus simply follows the thread back through the maze to find his way to the doors. He finds and leads the other Athenians out of the maze and quickly sails off to Athens with Ariadne and Phaedra. On the journey home, Theseus abandons Ariadne on the island of Naxos and continues to sail to Athens with his intended wife, Phaedra. On Naxos, Ariadne reflects on her actions and naivety of assisting with her brother's murder the Minotaur for Theseus, who she thought would marry her.

Instead of marrying Theseus, Ariadne is discovered on Naxos by the god, Dionysos , who she ends up marrying. In some versions of this myth, Dionysos appears to Theseus ordering him to abandon Ariadne, because he intends to wed her. Theseus is overjoyed to be almost home with his new wife Phaedra but absent-mindedly forgets to change the color of his sails from black to white.

His father, King Aegeus, seeing the black sails from afar is overcome with grief and kills himself by jumping off a cliff into the sea. It is this act which secures Theseus' place as the new Athenian king and explains the origin name of the Aegean Sea. The myth of Theseus and the Minotaur is seen in a wide array of pottery from antiquity. Most depictions show Theseus in battle with the Minotaur, who usually is in a submissive if not defeated role.

It was a popular subject matter for art as the myth itself embodies the basic struggle between the natural and unnatural or the civilized versus the uncivilized, which is a common theme in many Greek artistic representations. According to the myth, Minos was imprisoning his enemies in the Labyrinth so that the Minotaur could eat them. The labyrinth was such a complicated construction that no one could ever find the way out alive.

Son of Minos, Androgeus, went to Athens to participate to the Panathenaic Games, but he was killed during the Marathon by the bull that impregnated his mother Pasiphae. Minos was infuriated, and demanded Aegeus the king of Athens to send seven men and women every year to the Minotaur to advert the plague caused by the death of Androgeus. The third year, Theseus , son of Aegeus decided to be one of the seven young men that would go to Crete, in order to kill the Minotaur and end the human sacrifices to the monster. King Aegeus tried to make him change his mind but Theseus was determined to slay the Minotaur.

Theseus promised his father that he would put up white sails coming back from Crete, allowing him to know in advance that he was coming back alive. The boat would return with the black sails if Theseus was killed. Theseus announced to King Minos that he was going to kill the Monster, but Minos knew that even if he did manage to kill the Minotaur, Theseus would never be able to exit the Labyrinth. Theseus met Princess Ariadne , daughter of King Minos, who fell madly in love with him and decided to help Theseus. She gave him a thread and told him to unravel it as he would penetrate deeper and deeper into the Labyrinth, so that he knows the way out when he kills the monster.

Theseus followed her suggestion and entered the labyrinth with the thread. Theseus figured out that Ariadne was not with them when it was too late and he was so upset that he forgot the promise made to his father and did not change the sails. A different version of the myth mentions that Theseus deliberately left Ariadne on Naxos.

King Aegeus was waiting at Cape Sounion to see the sails of the boat. He saw the black sails from afar and presumed his son was dead. 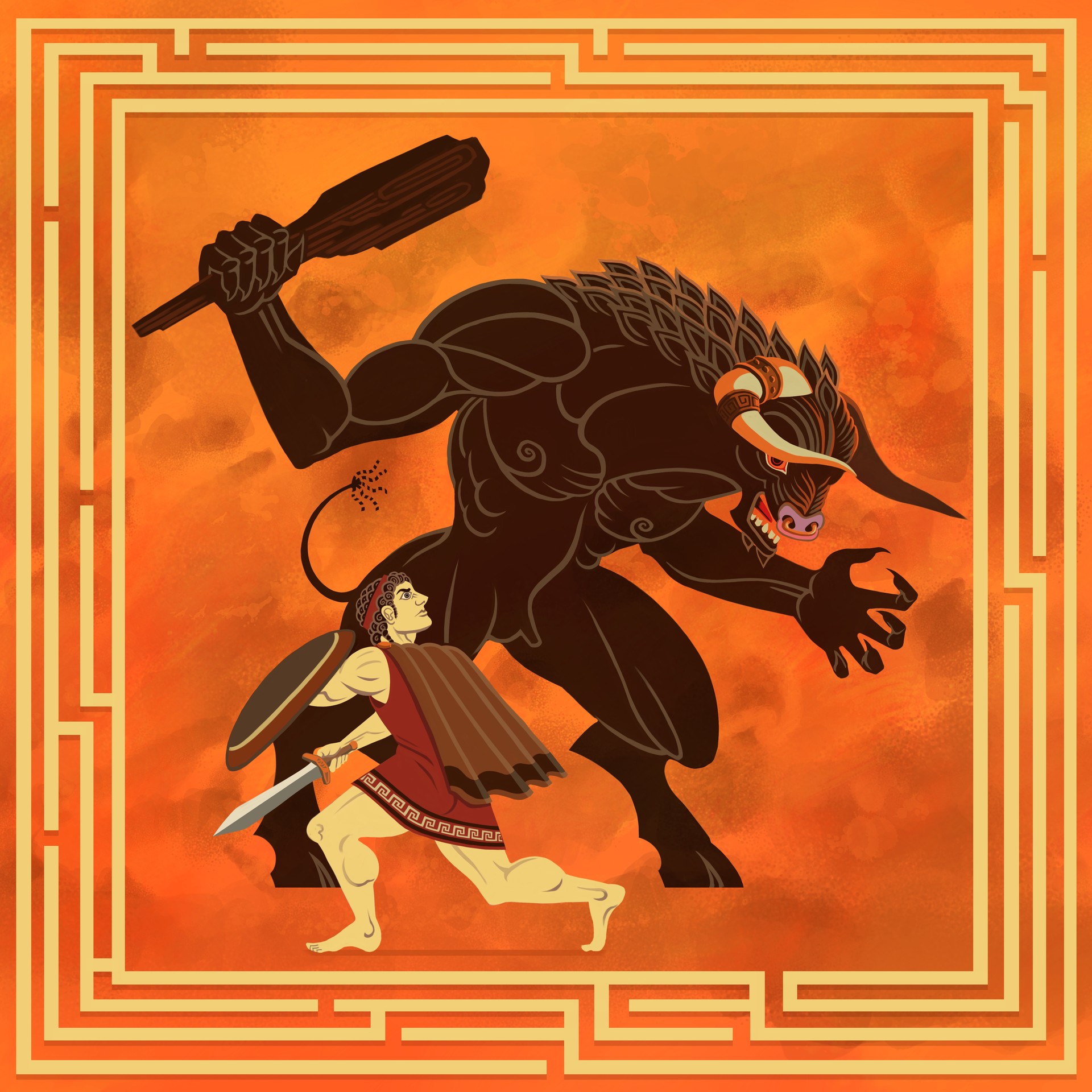 He dropped himself to the waters, committing suicide and since then, this sea is called the Aegean Sea. The myth of Theseus and the Minotaur has inspired numerous artists throughout the centuries, who have created paintings and sculptures dedicated to the myth and the hero of Athens. University is totally different from high school because it is much harder and you will have to do most of your work by yourself. Great that the internet has many good sources that you can always use to get help with your college homework at any time. This is a very good version of the myth.

This is about Theseus and the Minotaur. I suggest looking up just Minotaur. The information about this Greek myth is partly correct but you need more detail like the fact that boys and girls were sent every 9 yrs. No its not real this is just a myth the Greek made up. Yes, this is the correct story line.

The story about the Minotaur was very useful. I spent lots of time looking for information but at last I found the right information.

The Greek Myth of Theseus and the Minotaur

Short and sweet. Perfect for my project. I recommend this information to those who want short , detailed and useful information. Hey guys…. So on the third year, Theseus went.